A rock is a naturally occurring solid formation of one or more minerals. There are thousands of types of stone that have been quarried over the centuries. Quarries are located all over the world. Most of the natural stone comes from Italy, Spain, Turkey, the United States, Mexico, China, Taiwan, India, Greece, Canada, France and Brazil.

The minerals in the rock came from the same liquid and gas minerals that formed the earth. The Earth evolved as a massive body of gas and liquid minerals that slowly cooled and condensed into a solid core. Under the pressure, the earth's crust began to form, and the heavy minerals were forced into the Earth's core, where they were trapped. As the crust became thicker, it compressed around the inner core, which created intense pressure and heat inside the Earth. Crystals and other solid forms began to grow from the mineral vapors that were released. As the earth's crust began to expand and collapse, heat and pressure pushed solid minerals to the surface of the Earth, which formed colossal layers of rock. Some of these beds took up to a hundred million years to form. Many of the beds are now used as quarries where stone is quarried.

Most of these minerals can be identified by their color, hardness, and crystal formation. Crystals come in different shapes and sizes. The wide range of these minerals is often difficult to identify. Many stones are very similar to each other; however, they are all very different.

It is extremely important to know the exact type of stone that needs to be preserved. The stone is natural and may have adverse reactions to certain cleaning chemicals and treatments. Most stones are also natural alkalis, as well as dirt and soil; consequently, stone and dirt are attracted to each other, which often makes cleaning very difficult. This makes choosing the right cleaning procedures and chemicals for the stone very difficult.

The known types of stones that are used today are identified by four categories: SEDIMENT, METAMORPHIC, ROCKSTONE, and HUMAN.

The MAIN stone came from organic elements such as glaciers, rivers, wind, oceans, and plants. Tiny sedimentary fragments broke off from these elements and accumulated in the rocks. They were connected through millions of years of heat and pressure. SANDSTONE: Very strong formation of quartz grains (sand). It is usually formed in light brown or red tones. Categories of the most popular sandstone binders, such as silica, calcium, clay, and iron oxide. Fossil: It is considered a limestone that contains natural fossils such as sea shells and plants.

TRAVERTINE: Usually cream or reddish in color. It is formed as a result of the accumulation of calcite from hot springs. It contains many holes that were formed from water flowing through the stone. These holes are often filled with synthetic resins or cement. A lot of maintenance is required if the holes are not filled. It is classified as limestone and marble.

SOAPSTONE: A very soft stone made from a variety of talcum powder. It is a dense mineral that wears well and is often resistant to stains.

Limestone: mainly composed of calcite. It doesn't show much grain or crystal structure. It has a smooth, grainy surface. Depends on the hardness. Some dense limestones can be polished. The usual colors are black, gray, white, yellow, or brown. It is more likely to color than marble. Limestone is known to contain lime from seawater.

METAMORPHIC stone comes from the natural transition from one type of stone to another through a mixture of heat, pressure, and minerals. The change can be the development of a crystal formation, a change in texture, or a change in color. Marble is divided into three categories: (Stone World)

MARBLE: Recrystallized limestone, which was formed when the limestone softened from heat and pressure and recrystallized into marble, where mineral changes occurred. The main consistency is calcium and dolomite. It has a variety of colors, usually with strong veins and a large number of grains. Hardness values from 2.5 to 5 on the MOH scale.

DOLOMITE: if it contains more than 40% magnesium carbonate.

MAGNESIUM: If it contains 5 to 40% magnesium carbonate.

CALCITE: if it contains less than 5% magnesium carbonate. 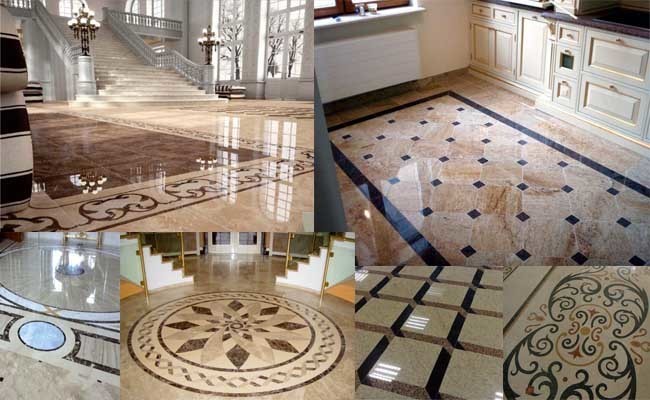 SERPENTINE: Defined by its markings, which look like snake skin. The most popular colors are green and brown. Hardness values from 2.5 to 4 on the MOH scale. It contains serpentine, minerals, contains a lot of magnesium and is of igneous origin. It does not always respond well to recrystallization or diamond polishing.

Native rocks are mostly formed from volcanic material, such as magma. Below the earth's surface, the liquid magma cooled and solidified. Mineral gases and liquids penetrated the stone and created new crystal formations with different colors.

GRANITE: mainly made of quartz (35%), feldspar (45%) and potassium. It usually has darker colors. Contains very little calcite, if any. Provides a heavy crystalline and granular appearance with mineral grains. It is a very hard material, and easier to maintain than marble. However, it is still porous and will stain. There are different types of granite depending on the percentage of quartz, mica, and feldspar. Black granite is known as anorthosite. It contains very little quartz and feldspar and has a different composition than real granite.

MAN-MADE stones are obtained from unnatural mixtures, such as resin or cement, with the addition of stone chips. AGGLOMERATE or CONGLOMERATE: marble chips embedded in a colored polymer composition.

The company has been on the service market for more than 11 years, has already gained recognition from thousands of clients